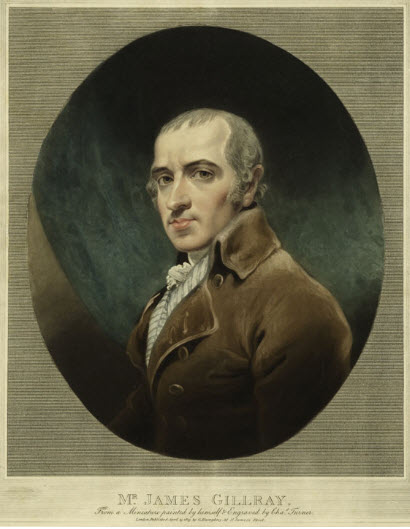 
James Gillray (13 August 1756 or 1757 – 1 June 1815), was an influential British cartoonist, printer and print maker famous for his etchings on subjects of political and social satire.

Gillray devoted most of his energies to caricaturing and mocking King George III of England, the insane King remembered as the King Who Lost America because he was on the throne during the American Revolution. He also directed his satiric wit at other political figures of the time. His output was prodigious, and he is believed to have created thousands of prints and drawings attacking various notables. Gillray also devoted his attentions to lampooning the French and especially Napoleon, while glorifying the personification of England, John Bull. Gillray's deft technique ranged from subtle criticism and innuendo to coarse and vulgar attacks on his satirical targets.

One anecdote says that when King George saw one of the caricatures of himself, he remarked that he did not understand them. Gillray then stepped up his attacks with even more venom.

Gillray lived most of his adult life with a Miss Humphrey, sometimes referred to as Mrs. Humphrey, who owned a shop which published and exhibited his prints. Miss Humphries and the shop, and even Gillray, are sometimes depicted inconspicuously within his caricatures.

The exact nature of Gillray's relationship with Miss Humphrey is not clear. It is said that he thought of marrying her, and that on one occasion he was on the way to the church with Mrs. Humphrey when he stopped and remarked: "This is a foolish affair, methinks, Miss Humphrey. We live very comfortably together; we had better let well alone." And that was that.

In 1806, Gillray's eyesight began to fade and the quality of his work suffered. Despondent, Gillray turned to alcohol which caused him to suffer painfully from gout. In 1811, Gillray attempted suicide by jumping from the roof of Humphrey's shop but he survived and became insane. He was cared for by Miss Humphrey until his death three years later.

Gillray is regarded as one of the most influential political caricaturists of all times. He influenced many contemporaries including George Cruikshank and many modern caricaturists also acknowledge their debt to him.

Examples of Works by James Gillray